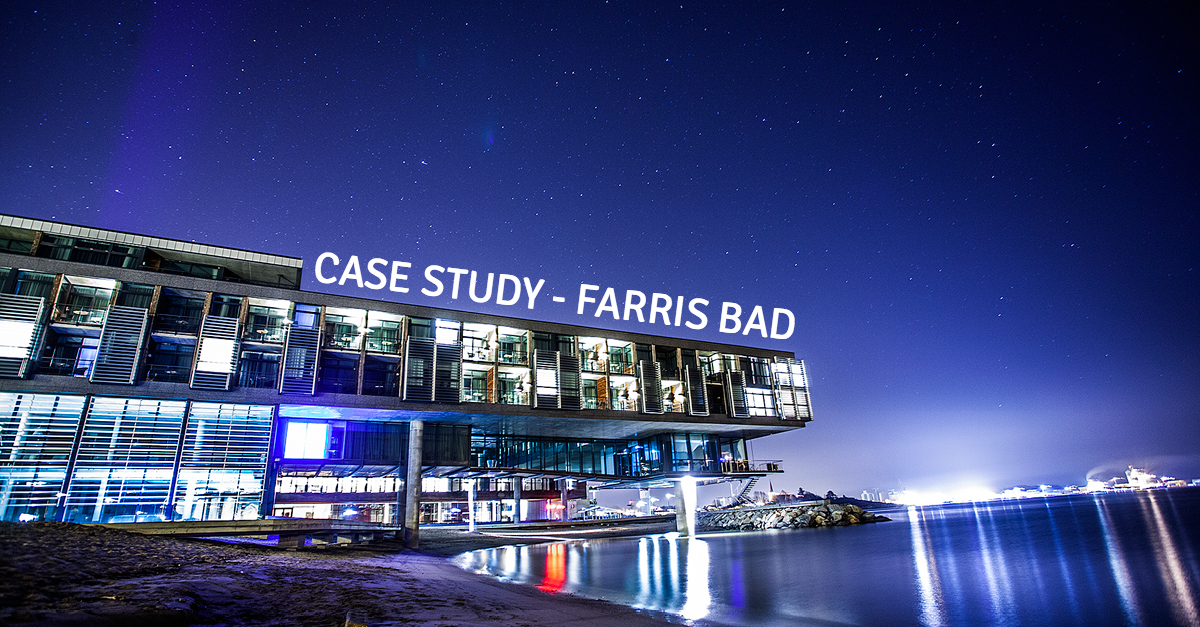 Farris Bad in Larvik, Norway, is the biggest spa-hotel in the Nordics. Fun (and impressive!) fact: Larvik is a city of about 44 000 inhabitants, and Farris Bad has about 44 000 fans on Facebook – fans from all over Norway, and abroad. So, here is an example of how you can succeed with a campaign even though you’re a medium sized company in a small town.

Farris Bad – the biggest spa-hotel in the Nordics, located in Larvik, Norway.

24SevenSocial – Do it yourself tools for effective social media marketing, with help from Andreas, for the sake of making the case.

Farris Bad wanted to do something big, exceed earlier campaigns, gather more e-mails to their email list and spread the word about their hotel. Knowing that women between 20 – 40 years of age is their main audience, we decided to do a competition with a great prize that they could give away. We landed on the following first prize: One person could win three suites at the hotel for one night, including dinner and treatments in the spa for six women.

To be able to collect the information, Farris Bad wanted a Facebook app / landing page with a simple signup form – built with 24SevenSocial.

Participants only had to fill in their name, email and accept the terms. Everyone who signed up also got a special offer after the end of the campaign as a consolation prize.

The idea behind the app was to include learnings from previous activities, with regards to both functionality and tone of voice. We knew that our target audience was willing to share if the concept was good enough. We chose a “get your heart going” kind of first prize, and a consolation prize to everyone who did not win. The easy entry and the built-in – yet voluntary! Sharing mechanisms really helped this campaign fly.

We also wanted to A/B test what form color that converted best as well, and tested a red form vs a blue one with 24SevenSocial’s built-in A/B tester. The conversion rate from the form was an astounding 35% and we saw no difference between the two colors.

A/B testing of ads was also important, as we wanted to know which age group of the target audience, and what ad creative that converted the best, and at the lowest cost. Since we used a conversion pixel we know exactly how much a conversion costed.

Farris Bad’s main target group is women in the Eastern part of Norway between 20 and 40 years old. When we set up the targeting, the audience was divided into two groups, members of their customer club and women 20-40 in that specific region. We also made sure to always exclude people who had already participated in the competition. Using 24SevenSocial´s splitting tool, these audiences were split into age bulks of 10 years to see what group converted best.

With a very high conversion rate and loads of sharing, likes and engagement the campaign was a huge success. Engaging the people who already had a relationship with the brand made it spread fast.
Campaign manager Frølich elaborates:

“ These kind of successes mean a lot. It makes us proud when the brand really lives. Our goal is to have it feel like brands used to do: visible, tangible and easy to really love. It´s a lot of reasoning in the marketplace, but it´s not that easy to fall in love these days. Not with a brand, anyways”

Ad that converted the best.

“Win a girls trip” (Maybe because its the only ad that uses win in the picture text?) 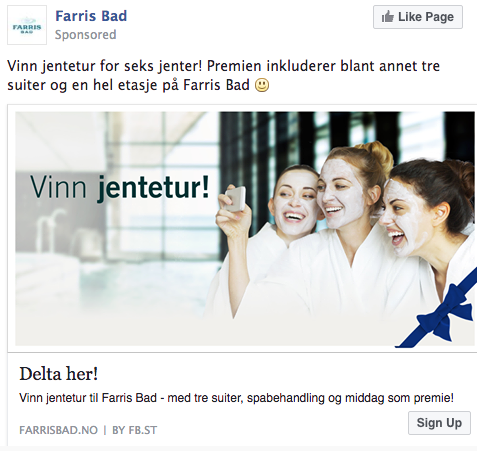 After announcing the winner all the participants received a gift certificate. This email alone resulted in 18 hotel bookings, at an estimated NOK 6000 (EUR 650) per booking. And that’s before meals and extra spa treatments.

Want to talk to us about doing something similar for your brand? Click here.