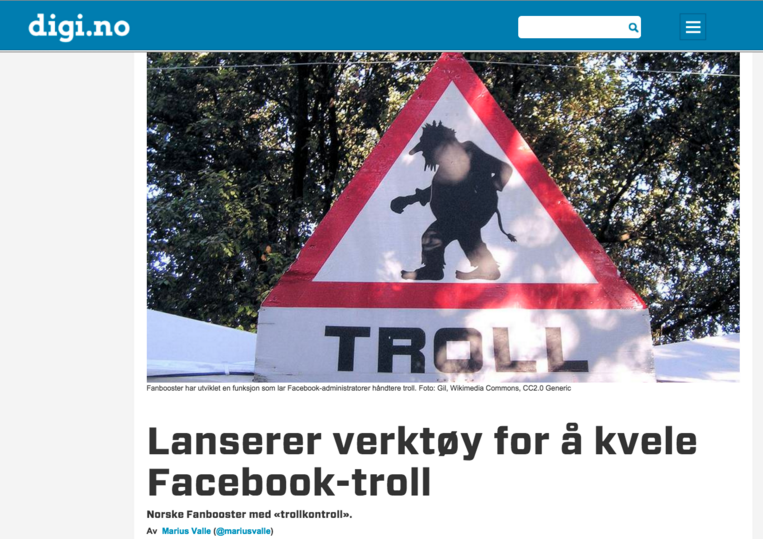 Social media was once a mystical place. A place where we tiptoed around and made friends with everyone we met. We retweeted, liked and heart’ed. And all was swell.

But as always, trolls came and ruined the fairytale. In this fairytale internet trolls. As desribed on Wikipedia, an internet troll is a person who “sows discord on the Internet by starting arguments or upsetting people, by posting inflammatory, extraneous, or off-topic messages in an online community (such as a newsgroup, forum, chat room, or blog) with the deliberate intent of provoking readers into an emotional response or of otherwise disrupting normal on-topic discussion, often for their own amusement.” Phew. A long, but accurate description there. There’s also the devoted haters, the all-out racists, and violent threat types. For the sake of readability, let’s just call them all Trolls.

Internet trolling aims to ruin the many healthy discussions that internet and social media gives-, and could have given to the world. Trolling makes people keep their opinions to themselves, and is thus a threat to free speech, and society as a whole. Not only to us as individuals, but also to brands that become terrified of standing for anything at all. We’re trying to fight that.

At 24SevenSocial, we recently launched a Troll Control feature which gives you an alert, whenever someone who has previously shown trolling behavior, posts on your Facebook page. You can also set the Troll Control to auto-hide the comment. This can help you filter out – or at least keep an extra eye on – people who have previously crossed the line for what you believe should be acceptable on your brand’s Facebook Page.

We also launched Storm Control, which gives you a similar alert or auto-hide when sudden bursts of comments start appearing on your Page. Be it trolls, spam, or someone at your company who’s messed something up big-time – doesn’t matter – you still need to know about it. Say you typically have about 10 comments per hour on your Page. Set the Storm Control to go off whenever you hit 20 comments per hour. The idea is that you get an alert when unusual behavior occurs. The faster you can get on top of these situations, the better.

It’s important to separate between trolling and negative comments. If you start only accepting the positive comments, then that’s bad for free speech too. And your Facebook Page becomes a boring place. We didn’t launch an anti negativity feature. We all need a fair share of negativity. It helps keep us on our toes. So it’s important to us that brands use this in a sensible way. We believe they will. But trolling – no thanks.

If you’re using 24SevenSocial, Inbox is already available to you with all the above features.

If you want to hear more about this, send an email to hello@24sevensocial.com and we’ll get back to you.

Posted on March 3, 2016 by Alexander in Uncategorized
Meet Sjur
Instagram updates your feed

Are you ready to take your social media management to the next level?